Twitter is a microblogging site where “tweeters” gather to share thoughts and updates ranging from sports to technology to politics and everything in between. With more than 300 million active monthly users, Twitter is on the smaller side of mainstream social networking giants, however, in the right market, Twitter is an integral part of a social media strategy.

When Twitter launched in 2006, tweets were restricted to 140 characters, which included handles (or usernames to you non-tweeters), links, and media elements. In 2017, Twitter expanded the character count to 280 and finished rolling out updates which shrunk all hyperlinks to 23 characters and made it so that handles included in replies and media elements no longer counted against your tweet limit.

Fun fact: Twitter is the home of the hashtag. In 2007, Chris Messina suggested users place a # symbol in front of words, which would help other users easily find messages with a specific theme or content, and the #hashtag was born. Today, the use of hashtags has become so popular across mainstream social media that certain networks limit the number of hashtags allowed per post to stop users from abusing the hashtag’s intent.

But how do you use a hashtag? What’s a retweet? And why do people put a period in front of handles to start their tweets?

To start, let’s talk about posting a standard tweet. Sending a tweet is pretty straight forward. Type your message and hit tweet. Remember, it must be less than 280 characters in order to send. If there are certain keywords in your tweet, consider placing a # symbol—or hashtag—in front of those words so fellow tweeters who are interested in that topic and quickly search by clicking on your #hashtag. 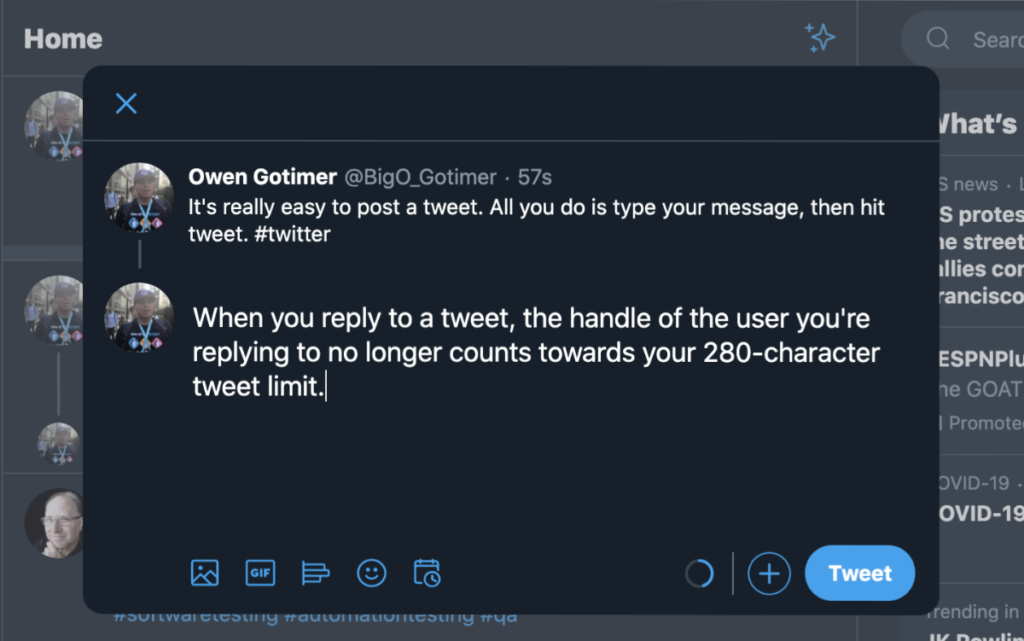 Up until 2016, when you started a tweet mentioning someone (e.g., @BigO_Gotimer hi), you needed to start the tweet with a character. Most tweeters defaulted to using a period, so the previous example would actually look like [email protected]_Gotimer hi. Because that was confusing to non-tweeters, and frankly a pretty dumb function even for avid tweeters, Twitter simplified the rules and made it so you no longer need to use [email protected] to start a tweet. 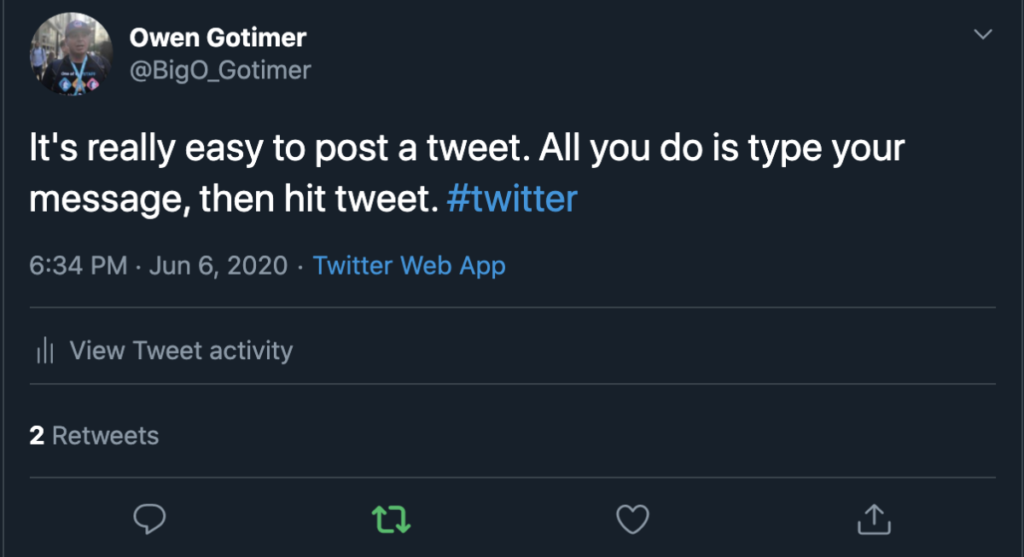 Are you trying to settle a disagreement? Or are you actually interested in the opinion of your followers? Twitter allows you to send polls to your followers to collect 100% scientific data (fact check me on this). You’re able to add up to four answer options to each poll question, which can again be up to 280 characters in length. You can set the duration of your poll to be anywhere from 5 minutes to 7 days. The Twitterverse votes and sees live results, however, each tweeter’s votes are anonymous. 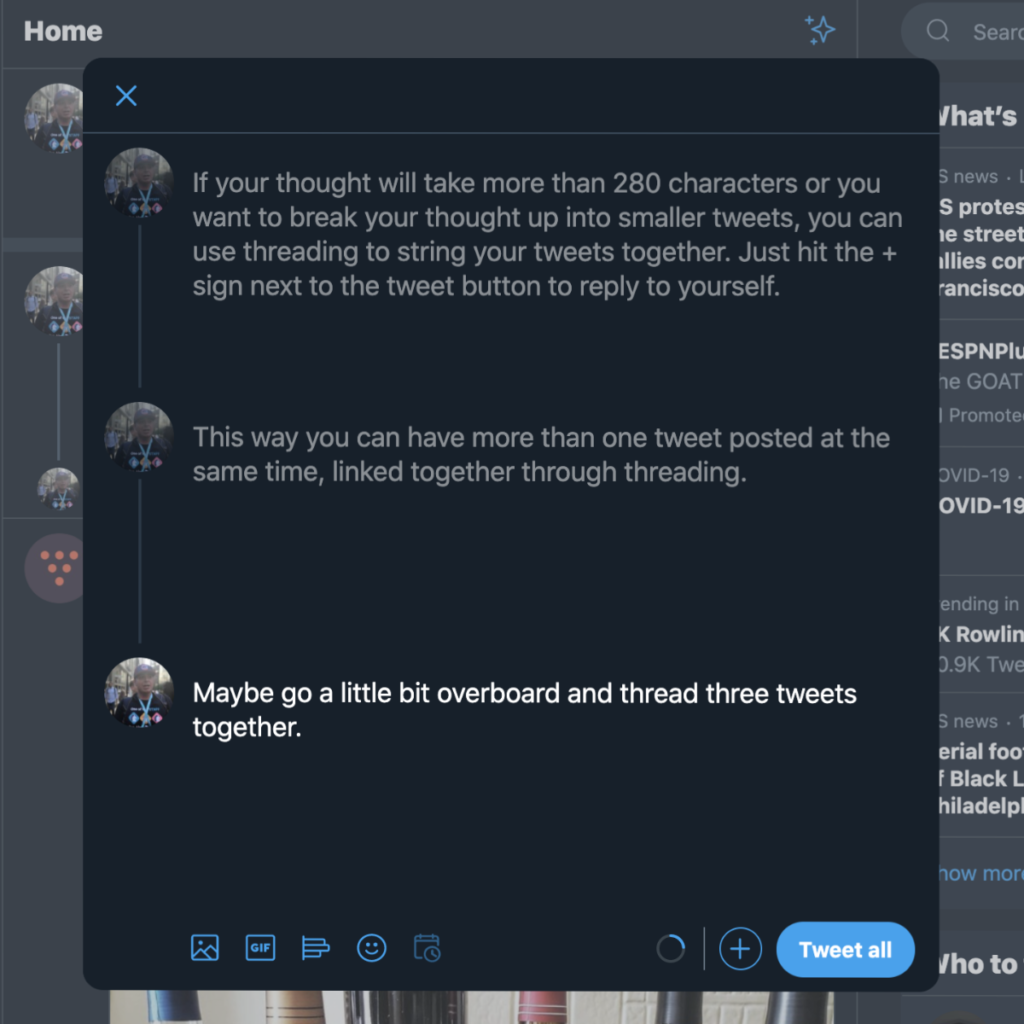 If your thought will take more than 280 characters or you want to break your thought up into smaller tweets, you can use threading to string your tweets together. Just hit the + sign next to the tweet button to start a thread. Basically, you’re replying to yourself without having to tweet + reply + reply + reply. 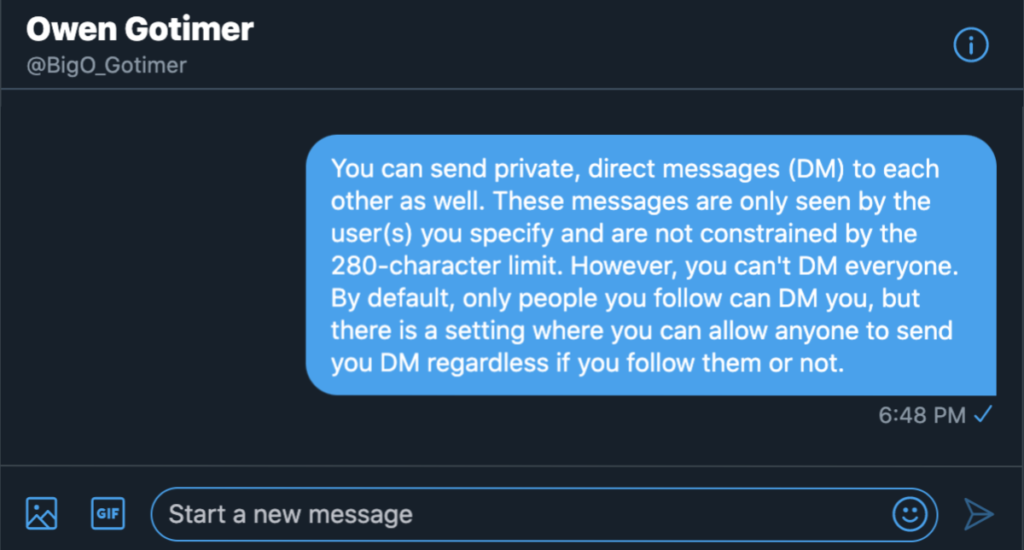 Finally, if you don’t want your tweets out in the public, you can send private, direct messages (DM) to specific users. Direct messages can only be seen by the user(s) you specify and are not constrained by the 280-character limit. However, you can’t DM everyone. By default, only people you follow can DM you, but there is a setting where you can allow anyone to send you DM regardless if you follow them or not.

If you still need some help getting started on Twitter, let’s set up a quick, 15-minute social media strategy meeting for absolutely free!